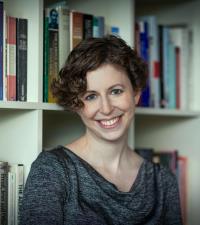 Erin Hochman is Associate Professor of History at Southern Methodist University.  Her first book, Imagining a Greater Germany: Republican Nationalism and the Idea of Anschluss (Cornell University Press, 2016), offers an innovative approach to the questions of state- and nation-building in interwar Central Europe by examining the entangled histories of the Weimar and First Austrian Republics.  Through an analysis of new state symbols, political rallies, and cultural celebrations, the book explores the energetic efforts made by the supporters of the Weimar and First Austrian Republics, or republicans, to legitimize and popularize the embattled republics.  It argues that republicans in both countries endeavored to link their fledgling democracies to the established tradition of großdeutsch nationalism – the idea that a German nation-state should include Austria – in an attempt to win over skeptics and opponents.  With appeals to a großdeutsch tradition, republicans fiercely contested conservative and right-wing claims that democracy and Germany, socialism and nationalism, Jew and German, were mutually exclusive categories.  They aimed at nothing less than creating their own form of nationalism, one that stood in direct opposition to the destructive visions of the political right.  By challenging the oft-cited distinction between “good” civic and “bad” ethnic nationalisms and drawing attention to the energetic efforts of republicans to create a cross-border partnership to defend democracy, Hochman emphasizes that the triumph of Nazi ideas about nationalism and politics was far from inevitable.  Imagining a Greater Germany was awarded the 2016 Hans Rosenberg Prize by the Central European History Society for best book published in the field and the 2017 Radomir Luza Prize by the American Friends of the Documentation Center of Austrian Resistance/Vienna and the Center Austria at the University of New Orleans for outstanding publication in Central European studies during the era of WWII.

She is currently working on a second book project, tentatively titled “Germany Unbound: The Politics of German Diaspora in the Weimar Republic and the Third Reich.”  It explores how the global flow of people and ideas influenced the heated debates about nationalism and politics in interwar Germany.  Due to the increased importance of the idea of the nation after World War I, it also became the crucial term used by Germans to fight the political battles of the Weimar Republic and Third Reich.  For German speakers, a national community transcended the boundaries of the state due to emigration and the creation of German national minorities after 1918.  By undertaking a globally informed study of nationalism, my book sheds new light on the efforts of opposing political groups to support or contest democracy and fascism. It thereby addresses how globalization affects political mobilization and perceptions of nationalism, processes that continue to shape the modern human experience.