Additional Contact Information
Questions may have to be vetted before I can answer. 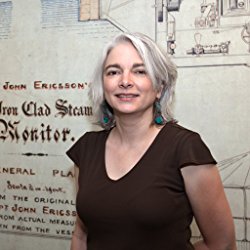 ANNA GIBSON HOLLOWAY​ is one of the leading experts on Civil War ironclads and 19th century marine salvage firms with 28 years of experience as a public historian. She joined SEARCH, Inc. in 2017 as the Museum Services Director where she is responsible for the day-to-day operations of that division. There she also works to develop best practices in curation, conservation, and public outreach. Prior to joining SEARCH, she served as the Maritime Historian for the National Park Service (NPS) in Washington, DC, where she provided expertise relating to American maritime history in all of its forms, through consultation, speaking engagements, publications, and primary source research. From 2000 to 2014, Anna was Vice President of Museum Collections and Programs at The Mariners’ Museum in Newport News, VA where she oversaw the Curatorial, Collections Management, Education, Conservation, Photography & Licensing, Exhibition Design, Web and social media presence, and the USS Monitor Center functions of the institution. As Curator of the award-winning USS Monitor Center, she led a multi-disciplinary team in the creation of the 20,000 square foot exhibition, and assisted in the development of the state-of-the-art conservation facility. She has lectured internationally on a variety of maritime topics, published articles in national magazines and journals, curated numerous exhibitions and programs. appeared on national television, and is the co-author (with Jonathan White) of “Our Little Monitor” (Kent State University Press, 2018). Her current research interests revolve around 19th century marine salvage firms in the Tidewater and Eastern Shore areas of Virginia, with a particular emphasis on B & J Baker and Co. of Norfolk, VA.

In the waning years of the 20th century, she was Manager of School Tour Programs for the Chrysler Museum of Art in Norfolk, VA, served as crew on Jamestown Settlement’s replica ships Susan Constant, Godspeed, and Discovery, and was a puppeteer and understudy fire-eater for the Colonial Williamsburg Foundation. She has also been an actor, a hurdy-gurdy player, a record store manager, a radio DJ, a Morris dancer, and has played in several bands (some of which were quite good).

This Winston-Salem native graduated from The University of North Carolina at Greensboro with baccalaureate degrees in English Literature and Medieval Civilization, neither of which helped her in her quest to be a rock star. She received her Master’s degree in Tudor/Stuart History and her PhD in American History from the College of William and Mary in Williamsburg, VA.

She is still not a rock star.

“The Monitor ​at the Washington Navy Yard,” with Jonathan W. White, in Civil War Navy, Fall 2018.

Media Coverage
"'It Strikes Me There's Something In It': Lincoln, the Monitor, and Popular Memory," Abraham Lincoln Institute Symposium at Ford's Theatre, Washington, DC, on C-SPAN March 2018 https://www.c-span.org/video/?442254-7/uss-monitor-warship