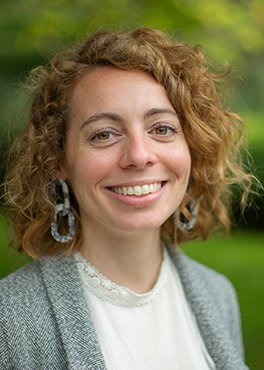 Megan Brown is a historian of Modern Europe with a focus on 20th century France, European integration, and empire. Her teaching and research interests include postwar politics, decolonization, the history of France and Algeria, and questions of citizenship. She is currently working on a book manuscript about the role of empire in the formation of integrated postwar European institutions (European Coal and Steel Community; European Economic Community; and more). This project interrogates how and why current notions of “Europe” and European identity emerged and what other possible forms of integration were debated and planned following World War II, particularly as France’s empire began to shrink.

Professor Brown received her PhD in History from the Graduate Center, CUNY. At Swarthmore, she teaches surveys of the 19th and 20th centuries and a variety of courses on topics including postwar Western Europe, the French Revolution, and settler colonialism. In 2016-2017, she was a Teaching Fellow at Sciences Po (France). Professor Brown is a former Fulbright Scholar to France and her writing has been published in Modern & Contemporary France.