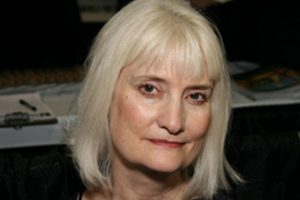 “Terese Svoboda is one of those writers you would be tempted to read regardless of the setting or the period or the plot or even the genre.”–Bloomsbury Review. She has published 18 books of fiction, poetry, memoir, biography, and a book of translation from the Nuer. Professor Harriman’s Steam Air-Ship (Eyewear UK) is her most recent book of poetry. Anything That Burns You: A Portrait of Lola Ridge, Radical Poet (biography) was reissued in paper in 2018. Winner of a Guggenheim, a Bobst Prize in fiction, an Iowa Prize for poetry, a NEH grant for translation, an O. Henry Award for the short story, the Graywolf Nonfiction Prize, 3 NYFA fellowships, a Pushcart Prize for the essay, a Bellagio residency for a libretto, and the Jerome Foundation Award in video, she also wrote the libretto for the opera WET that premiered at L.A.’s RedCat Theater. Great American Desert, a book of stories, appears in March. In a starred review, Kirkus writes: “[Svoboda’s] enigmatic sentences, elliptical narratives, and percussive plots delve into the possibilities of form, genre, and plausible futures, but always with an eye on the vast subterranean psychologies of her all-too-real creations.”

Great American Desert (stories)Mad Creek Books, Ohio State University Press, 2019. “Terese Svoboda has brought a poet’s lyrical intensity and factual density to prose fiction, and writes like no one else.” –Tom McGuane.“Great American Desert is a devious and extraordinary new collection of stories from one of our best writers, Terese Svoboda.” – Karen Russell. “Stunning, deeply felt, and uniquely perceptive.” – Los Angeles Review of Books. “Stories that surprise, disturb, and amuse in equal measure.” – Publisher’s Weekly. “This is a wonderful, and fiercely original collection for anyone who enjoys fiction in any genre—literary, speculative, horror, romance.”– Litpub. “Svoboda’s extraordinary imagination and her special gift for the keen observation of the off-kilter, combined with her rich, agile writing, produce in Great American Desert an oracular body of fiction that compels and fascinates.” – Compulsive Reader. Starred Kirkus and Booklist.

Anything That Burns You: Lola Ridge, Radical Poet (biography) Schaffner Press, 2016. Paper, 2018. “No one who cares about American culture will want to miss this book.”– Cary Nelson, Editor of Anthology of American Poetry (Oxford, 2014). “Magisterial” – Washington Post. “One of her strongest assets is the ability to orient the reader within a constellation of what others might consider irreconcilable identities: Irish, Australasian, immigrant, American, radical, mother, lover, formalist, avant-garde modernist, hostess, editor, poet.” – Joshua Wall, Journal of American Modernism. Shortlisted for the May Sarton Award.

When the Next Big War Blows Down the Valley: Selected and New Poems Anhinga Press, 2015. “A fierce and formidable book” – Rigoberto Gonzalez. “Remarkably precise and utterly strange” – Cate Marvin. “Terese Svoboda is one of few contemporary American writers who possesses a global consciousness.” – Brooklyn Rail.

Bohemian Girl (novel) Bison Books, U. of Nebraska Press, 2011. “She will, of course, compared to Willa Cather – and deservedly so.” – Kurt Andersen. Starred Booklist. Brooklyn Book Festival, L.A. Festival of the Book, Printer’s Row in Chicago. Finalist for Foreword’s Historical Book of the Year. One of 10 Best Westerns 2012 – Booklist.