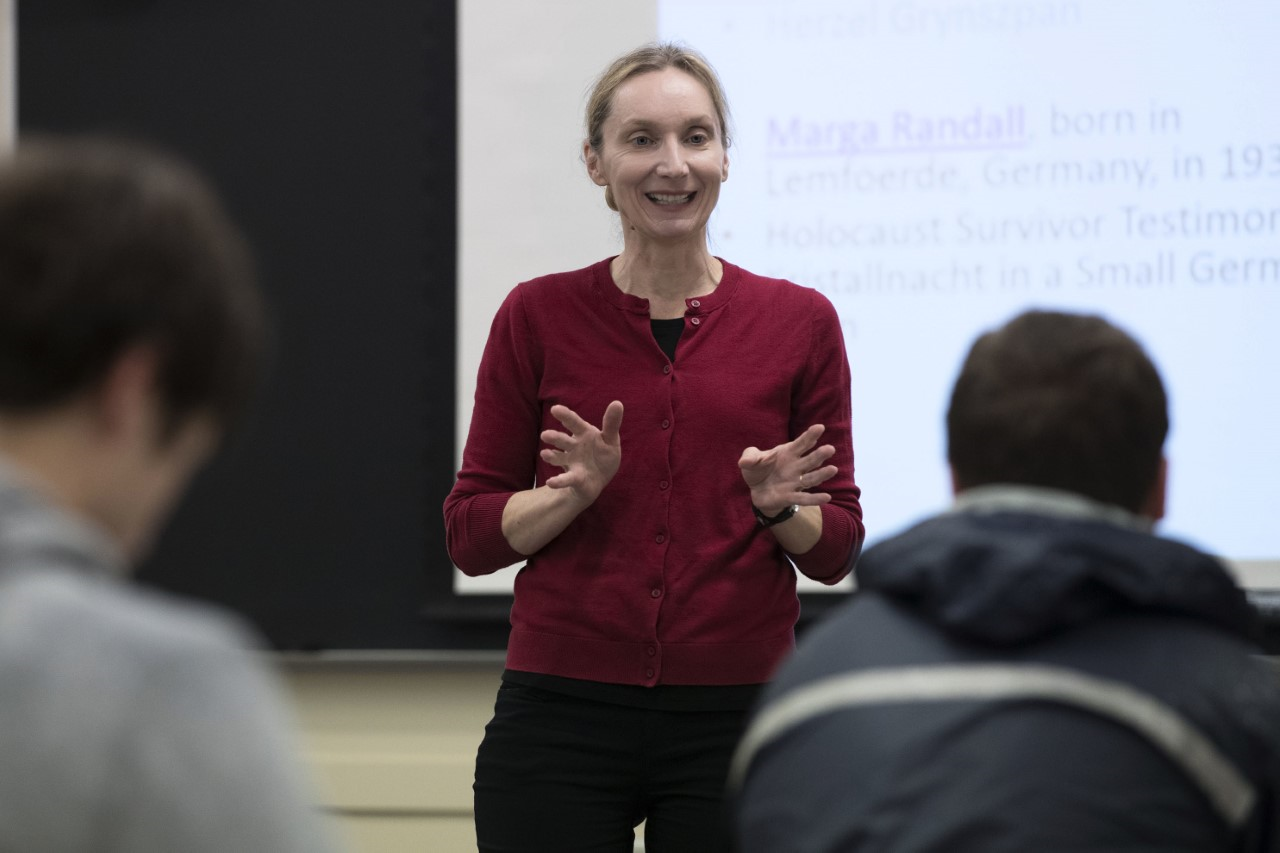 I am an Associate Professor of German and History with a joint appointment in the Department of Germanic Languages and Literatures, and the Corcoran Department of History. My current responsibilities include the directorship of the Center for German Studies and the European Studies Program at UVa. I hold a PhD in German and History from the University of Michigan, and an M.A. in German Literature, History, and Linguistics from the Free University of Berlin.

My research combines the historical study of German culture with theoretical analyses. I have published broadly on the political culture of Weimar democracy and am currently completing my manuscript, Invisible Fatherland: Constitutional Patriotism in Weimar Germany. Building on my earlier work on the discursive forms and symbolic practices of Weimar democracy, and driving the historiography forward, my book explores the republic as the birthplace of German constitutional patriotism. The metaphor of the “invisible fatherland,” coined by German law professor Gustav Radbruch in 1922, captures the challenge that faced the young democracy: to rally the nation around legally coded principles and ideas—such as equality and justice—that are as such are imperceptible to the senses. The symbolic politics of the republican state and nation endeavored to make these norms and ideals visible and concrete, thus drawing the contours of a centrist alternative to extremist politics the interwar period also engendered.

Entering Weimar constitutional patriotism into the global record of democracy, while also asking unsettling questions about the resilience of (liberal) democracy, requires a deeper appreciation of its centrist embrace of normalcy and compromise. We need, as the organizers of a conference on Weimar 2020 write, to go beyond the filters of an “intervening century of … regrets, and unfinished business.” In fact, I would argue that we need to normalize Weimar democracy. Only then can we grasp with full clarity the consequential fact that any (liberal) democracy can fail in the face of the fascist threat, even our own.

My second research interest revolves around the idiom and culture of sustainability or Nachhaltigkeit. In the United States we sometimes struggle to imagine what it takes to become a more sustainable society. Germany is widely regarded as a frontrunner in environmental policy and practice. I have put together an edited volume that explores and contextualizes the German Green policies and practices, with the aim to engender a fruitful transatlantic discussion as to which of these interventions are transferable to the United States. The initial lecture series that produced this body of work was connected to Generation Green, a pilot undergraduate course cross-listed in the Department of Science, Technology & Society (School of Engineering) and the German Department (College of Arts and Sciences). The resultant book, published in Palgrave Macmillan’s Climate, Energy and the Environment Series, targets a broad audience of interested, non-specialist readers. My own contribution explores the German energy revolution with an eye to the country’s decision to phase out nuclear power within the next decade. I expect to develop this exploratory essay into a book-length historical study of the German culture of sustainability.

Teaching is an enjoyable and rewarding component of my academic work. Neighbors and Enemies, one of my signature courses, explores the tension in Germany between a chauvinist belief in German racial or cultural superiority and moments of genuine openness to strangers. Drawing on a variety of different materials – from history and philosophy to film and literature – the seminar challenges students to consider the construction and deconstruction of images of the “enemy” from different angles. My seminars on German and Jews, Germany and the Environment, and Hitler in History and Fiction also practice the careful multi-disciplinarity that characterizes this course. My larger survey classes include German History, Nazi Germany, and Western Civilization. Together with Kyrill Kunakhovich, I am developing the concept for a large lecture course on Fascism in Global Perspective. In general, my teaching gravitates toward a co-creative style of instruction that pays particular attention to the affective logics and representational regimes that shape our understanding of the past.

In my capacity as the Director of the Center for German Studies and of the European Studies MA Program at UVa, I have organized and hosted a great number of events on a variety of themes, reaching from the Car and its Future to The Politics of Fear, and Migration, Sanctuary and Belonging, In response to the white supremacy attacks on Charlottesville in 2017, I have built a multi-year research and teaching partnership with the Heinrich Böll Foundation North America on Memory, Democracy, and Transformation. This transatlantic initiative invites UVa faculty and students to work with German scholars, artists, and activists on difficult chapters of history from slavery and segregation in the United States to colonialism, genocide, and dictatorship in Germany. The initiative also provides the wider Charlottesville community an opportunity to engage in constructive dialogue on the topic of historical inequality, injustice, and responsibility. Click [here, 2018] and [here, 2019] for documentation and press coverage. Together with Kyrill Kunakhovich and Nicole Shea, I co-edited a Special Issue of EuropeNow (issue 14, Feb. 2018) on the topic of “Nationalism, Nativism, and the Revolt Against Globalization” The issue featured a Campus Spotlight on UVa and its response to the events of August 11-12, 2017.

Nationalism, Nativism, and the Revolt Against Globalization, Special Issue of EuropeNow (Journal of the Council for European Studies); co-edited with Kyrill Kunakhovich and Nicole Shea; February 2018.

“With a Passion for Reason: Celebrating the Constitution in Weimar Germany,” Central European History, Volume 43, Number 4 (December 2010), Special issue on the Culture of Politics / Politics of Culture in the Weimar Republic.