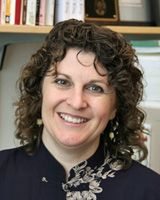 Jenny Hale Pulsipher is an associate professor of history at Brigham Young University, specializing in early American and American Indian history. She received her PhD in American History from Brandeis University in 1999 and began teaching at BYU in the fall of 1998. Her first book, “Subjects unto the Same King”: Indians, English, and the Contest for Authority in Colonial New England, was published by the University of Pennsylvania Press in 2005 and was selected as a Choice Magazine Outstanding Academic Title in 2006.  Her second book, Swindler Sachem: The American Indian who Sold His Birthright, Dropped Out of Harvard, and Conned the King of England (Yale University Press, 2018), focuses on Indian-English struggles over Native land and sovereignty during an era of political turmoil in the English empire and reveals how one remarkable man–John Wompas–navigated these perilous waters for the benefit of himself and his people. Her next book project, Shadow Sacagawea: A Family History of Race and Religion in the American West, will examine the life experiences of her fourth-great grandmother, Sally Exervier Ward, a Shoshone Indian woman who married first a French-Canadian and then an American fur trader, bore four mixed-race children, and was baptized into the Mormon Church, thus beginning a family history in which Anglo-European, Native, and Mormon cultures, with their respective approaches to race and religion, combined, clashed, and shaped the choices and identities of her descendants. Dr. Pulsipher has also published articles in the William and Mary Quarterly, Early American Literature, The New England Quarterly, and The Massachusetts Historical Review.

Swindler Sachem: The Nipmuc Indian Who Sold His Birthright, Dropped Out of Harvard, and Conned the King of England. New Haven: Yale University Press, 2018.