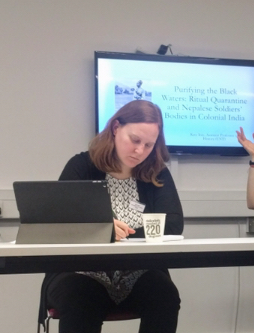 Kate Imy is a historian of culture and war in British colonial Asia. Her first book, Faithful Fighters: Identity and Power in the British Indian Army, examines culture and anti-colonialism in the 20th century British Indian army. It won the NACBS Stansky prize and the Pacific Coast Branch Book Award of the American Historical Association. Her next project considers soldier and civilian experiences of war in Singapore and Malaya. She is a recipient of a Fulbright fellowship, two CLS awards (Hindi and Urdu), a fellowship from the Institute of Historical Research (London), and a Bernadotte E. Schmitt grant from the American Historical Association. In 2021 she is the Lee Kong Chian NUS-Stanford Fellow on Southeast Asia.

**winner of the NACBS Stansky prize

**winner of the Pacific Coast Branch Award of the AHA

“Transactions: Sex, Power, and Resistance in Colonial South and Southeast Asia,” in Dagmar Herzog and Chelsea Schields, eds., The Routledge Companion to Sexuality and Colonialism, accepted and under contract, 2021.