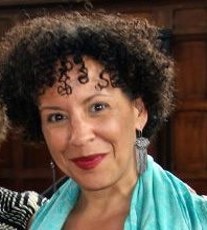 Dr. P. Gabrielle Foreman is an an award-winning teacher, scholar, mentor and activist who has published extensively on issues of race, reform and resistance in the nineteenth century with a focus on the past’s continuing hold on the world we inhabit today. Gabrielle is considered a leader in Black digital and public history and has been recognized for her commitment to project and institution building that attends to pipeline and equity issues. Gabrielle is the founding faculty director of the Colored Conventions Project. Run collaboratively, CCP is a collective research project whose members includes graduate student leaders, librarians, undergraduate researchers and North American teaching partners. The project has been featured in the New York Times and awarded prizes by the American Studies Association, the MLA, and the American Culture/Popular Culture Association. It was chosen as one of the NEH’s NEH Essential Project, Past and Present. Gabrielle Foreman is the Ned B. Allen Professor of English, Professor of History and Africana Studies, and Senior Library Fellow at the University of Delaware. She is always ready to venture off in search new or beautiful places to walk or new and interesting places to eat.

Gabrielle Foreman gives keynotes and invited talks that highlight how contemporary Black artists and poets serve as public historians of slavery. This work emerges from her book in progress, The Art of DisMemory: Historicizing Slavery in Poetry, Print and Material Culture.

Addresses and recent writing also emerge from her work as founding faculty director of the award-winning Colored Conventions Project. Gabrielle is co-editing the first collection on the Colored Conventions movement; launched in 1830, it predated and outlived the American Anti-Slavery Society. It involved the most renowned Black nineteenth-century speakers, editors, religious leaders and activists, as well as thousands of others who organized for voting rights and educational justice.  Though women are largely absented from the official records, the project’s MOUs and commitment to resurrecting the role of Black women in the movement has been been noted as a model for working through archival absences that exclude women’s organizational energy, skills and contributions in the history they were partners in building.

Gabrielle works as research director with choreographer and arts education leader, Dr. Lynnette Overby, and poet Glenis Redmond. Their performance on Harriet Wilson has been adopted in college and high school classes. Their work on the enslaved poet-potter David Drake, on the Convention movement and on Black women activists has been performed at conferences and performance centers worldwide. Their book Praise Songs for Dave the Potter: Art and Poetry for David Drake will be out in 2020.