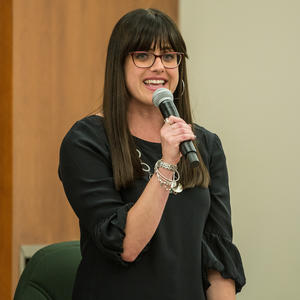 Vanessa Wilkie is the William A. Moffett Curator of Medieval Manuscripts and British History at The Huntington Library in Southern California.

In 2015, Vanessa co-curated The Huntington’s exhibit, Magna Carta: Law and Legend 1215-2015.  In 2017, she curated her first solo-exhibit, The Reformation: From the Word to the World.  Today Vanessa serves on the advisory committee for /five, The Huntington’s 5-year program which invites contemporary artists to create work based on the institution’s collections.

As a member of the Board of Directors for Digital Scriptorium, Vanessa is deeply involved in digital humanities initiatives and works closely with other scholar-curators, digital humanists, librarians, archivists, conservators, imaging scientists, and computer scientists.

Vanessa’s current research addresses the legal and literary agency of elite mothers on behalf of their daughters and grandchildren.  This work addresses the history of sexual violence and women’s access to litigation in 16th and 17th century England.  Vanessa also works on early modern death rituals, memorialization, heraldry, and emblems.