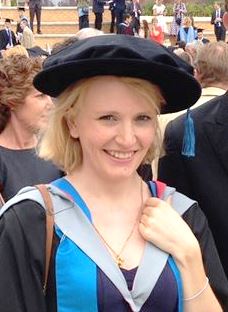 I’m a literary scholar focussing on the history of medicine and the body. My first book looked at how cancer was conceived of, diagnosed and treated in the early modern period c.1580-1720. My forthcoming book explores surgery and disability in the seventeenth century, asking what happened to people who underwent life-altering operations such as amputation, castration, and mastectomy.

In addition to surgery, medicine and body studies, I also have interest in early modern cognition and mentall illness, gender, and transhumanism.

2. [In press] Article: ‘”With one stroak of his razour”: tales of self-gelding in early modern England.’ Journal for the Social History of Medicine (open access).

3. Article: ‘Missing Parts in The Shoemaker’s Holiday’ Renaissance Drama 45:2 (Fall 2017) pp. 161–179 (open access). Discussing the treatment of disability in Thomas Dekker’s 1600 play, and how this relates to attitudes toward disabled ex-soldiers in Eilzabethan England.

4. Article: ‘”Keep your face out of my way or I’ll bite off your nose”: Homoplastics, Sympathy, and the Noble Body in the Tatler, 1710’ Journal for Early Modern Cultural Studies, 17.4 (Fall 2017): 113-132. This article argued that the nose ‘replacement’ operation pioneered by Gaspare Tagliacozzi in the 1500s was used as a motif by satirists of the seventeenth and eighteenth centuries to discuss the fallibility of physiognomy and the ‘noble body.’

6. Monograph: Constructions of Cancer in Early Modern England, c.1580 – 1720: Ravenous Natures. ‘Literature and Science’ series, Palgrave Macmillan, 2015 (open access). The first book about cancer in the early modern period, this text showed how cancer was diagnosed and treated, and how it was differentiated from other tumorous diseases.