Keywords
History of law Reformation and history of education Cultural transfer und transfer of knowledge between France and Germany/Prussia and especially imagology and functionality of images in political discourses Cultural history of violence and esp. "Military Enlightenment" Social history of women in the early modern period 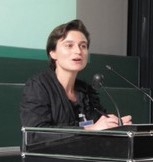 I studied law at the Universities of Paris XII and Osnabrück and obtained my doctorate degree at the Faculty of Law in Osnabrück with a dissertation on the understanding of law and state according to the Wittenberg reformer Philipp Melanchthon (1497–1560). For this dissertation, I received an award from the Eberhard-Freiherr-von-Kuenssberg Foundation. I went on to work on several projects as a postdoctoral research fellow at the Centre Marc Bloch and at Humboldt University in Berlin. In 2004, I successfully completed my training as a lawyer in Paris. In 2005, I took up a position as research assistant at the Department of History at the University of Heidelberg, where I qualified as a university lecturer in 2013 with habilitation on images of Prussia at the end of the Ancien Régime in France.

In my research, I deal with questions of legal humanism, the imagology and functionality of images in political discourse, the transfer of culture and knowledge between France and Germany or Prussia, and the cultural history of violence. In my new research project in the field of Military Enlightenment, I examine the interrelationships between Enlightenment and the military in Europe. In my teaching work, I offer a wide range of topics, including the history of the early modern period in Europe, current research discussions and the history of Franco-German historiography (16th – 20th century).

I am active in French-German networks, served as a member of the scientific advisory board of the French-German University (DFH-UFA) from 2009 to 2017, and be involved in scholarships for talented students and the advancement of women in several foundations. I get several scholarships, including from the Robert Bosch Foundation, the University of Heidelberg and the German Research Foundation, and a junior fellow at the Freiburg Institute for Advanced Studies (FRIAS).

I am German and French citizenship and the first woman of French descent to be appointed to a professorship of history at a German university.