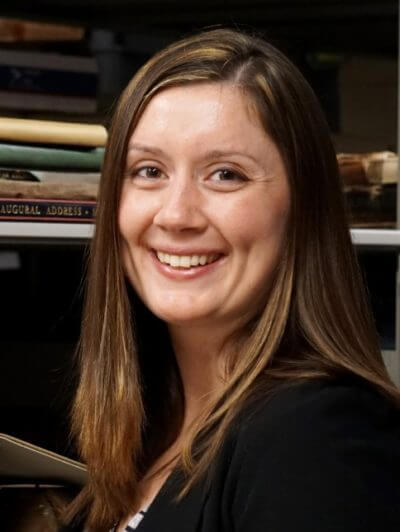 Anne E. Moseley, CIT is the first Director of Engagement and Curator for the Sangamon Experience and Acting Director of the Center for Lincoln Studies at the University of Illinois at Springfield.

Her previous position was director and curator of the Lincoln Heritage Museum at Lincoln College, she holds a Bachelor’s degree in History from Southern Illinois University at Edwardsville (SIUE) and a Master’s degree in Public History from the University of Illinois at Springfield (UIS).

During the summer of 2007 she worked as a researcher and tour guide for the Old State Capital in Springfield, Illinois. In the summer of 2008 she was an intern for the Missouri History Museum Education Department in St. Louis, Missouri. There she developed gallery talks and other educational programs for their museum. While at UIS she worked for the Illinois Regional Archives Depository (IRAD) on campus. During her time working for IRAD she indexed central Illinois county records.

In the spring of 2010 she participated in the UIS Arts, Humanities and Social Sciences Research Symposium and won an award for her paper The Family Business: The Lochridge Brothers paper. The same paper was presented during the 2010 Conference on Illinois History. In the summer of 2010 she worked for Looking for Lincoln Coalition’s (LFLC) History Comes Alive program.  While working for LFLC She developed educational activities for the community and was a Living History interpreter.